กำลังอ่าน :
Everyone needed on board if we are to fight the Climate Change, says young crusader Nanticha.
เขียนโดย : Workpoint News
Features

Everyone needed on board if we are to fight the Climate Change, says young crusader Nanticha.

Twenty-one-year-old Nanticha Ocharoenchai “Lynn”, founder of Climate Strike Thailand, is on a crusade to save the planet. Stop one-time plastic use isn’t good enough, she argues. She has launched three rallies to raise awareness on the climate emergency so far. Despite lukewarm support at initial stage, she is determined to fight on, believing that once people realize the urgency and understand that money is nothing without a planet to live in, the movement will gather momentum. It is an uphill task for a young crusader, but she wants to bring

all parties especially the policy-makers and business sector, stressing that the battle needs everyone on board. “Everybody needs to change” she insists.

Nanticha talks to Workpoint’s Editor Noppatjak Attanon about her role in the movement, her thoughts on climate change in the context of Thailand and why she has to take this initiative. You’ve already kicked off the movement. Can you share with its starting point and your role?

I’ve read the article about Greta (Thunberg, Swedish teen) and I felt hopeless and frustrated as no one cared about the environment so I created this strike. The first Global Climate Strike was in March this year. I created this strike event and more and more people got interested so that’s the first climate strike in Thailand. The 2nd one was in May this year: the number (of people joining) doubled to around 100. We recently held the 3rd event and people are becoming more active and passionate about this.

Have you been encouraged or discouraged over the past year?

I think it’s up and down with the whole climate change. I often get very pessimistic and hopeless seeing the progress of different countries.  I think being realistic is more of the right word seeing. The government policy of each country willing to put forwards to Paris agreement is not enough. At the same time there’s no reason to give up. This is our life and what we are fighting hard for is our job.

Could you tell us more on your motivations?

In the beginning, I started Climate Strike Thailand because I was just angry at people who don’t care about the issue. After the first strike, I realized that I was wrong. The amount of support keeps me going, seeing a lot of people who have already doing a lot – planting trees and cleaning the sea – without waiting for government.  We’ve all the solutions and we just need the government and corporations to get involved. Climate inaction is human rights violation and we need to hold polluters accountable as we cannot individually change the system we need to voice our demands.

I started this moment out of my awareness about the environment that came from education. I stand for my courage to speak up, I wasn’t afraid of doing so. I wasn’t afraid everyone is going to scold me for doing so. And I want to see a community that encourage more of that. 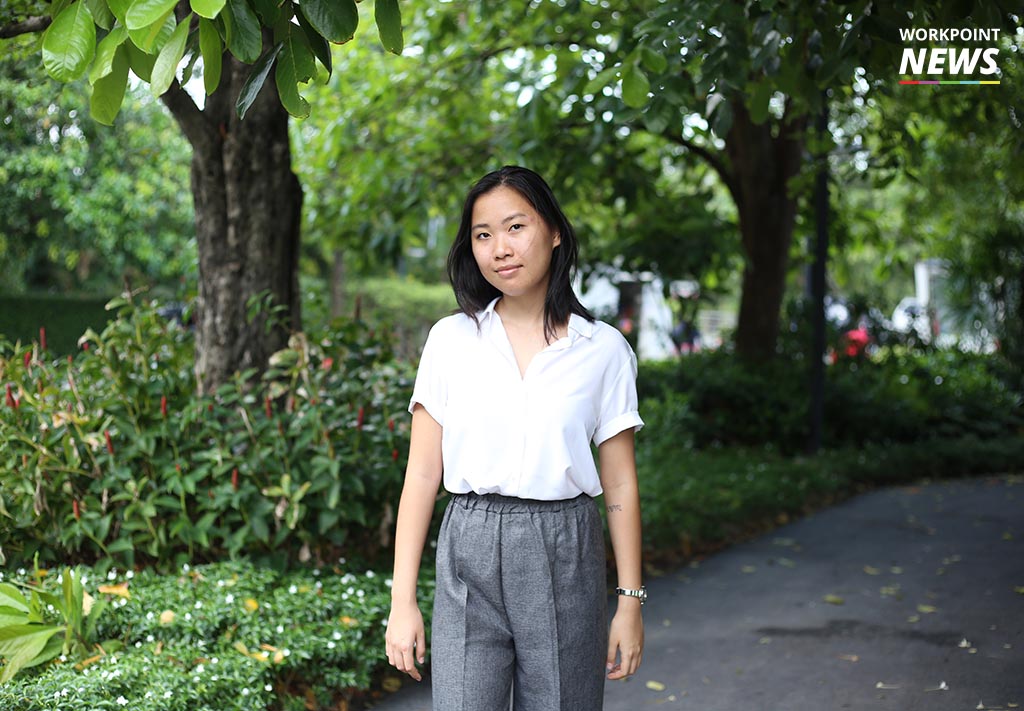 What makes you feel angry the most?

When you talk about climate change or global warming in Thailand, it’s just about plastic but it’s just a tip of the iceberg.  There’s no green place in Bangkok. The city has one of the lowest green space ratio in the world with each person having only have 3.3 sqm of green space. We have so many shopping malls and far fewer trees. We tend to prefer economic growth and unsustainable development to  quality of living, and that is frustrating. You don’t need to work in environment field to feel that way.

Have you been working with the government and the private sector?

I’ve been working with a few NGOs and talking to some government agencies. We handed an open letter to Ministry of Natural Resources and Environment, demanding them to declare climate emergency and to commit to net zero carbon economy by 2040. They accepted the letter but did not respond with any concrete measure.

Greta has been on the center stage on this issue. Can you relate what she has done to what we’re going now here?

Things about Greta have moved a lot of people. Some wondered why we protested instead of planting trees and doing something friendly to environment. But the truth is we need to take the biggest polluters into account. At the end of the day, the biggest changes have to come from the government and corporations. Taking care of the environment and people should be the government’s responsibilities. As consumers, we have choices and decision-making power but what could we do if everything on the market is unsustainable. The government also has duties to take care of people, giving them options and encourage the private sector to provide sustainable options. That’s what the movement is all about, using people power to voice demands for climate action and justice. People have tried but it isn’t enough. We need the system to change entirely and we need the government and private sector to put people and planet before profits. Good news is we can align them. Being sustainable doesn’t mean losing profit. There are ways for using clean and renewable energy which also creates lots of job and a new economy. 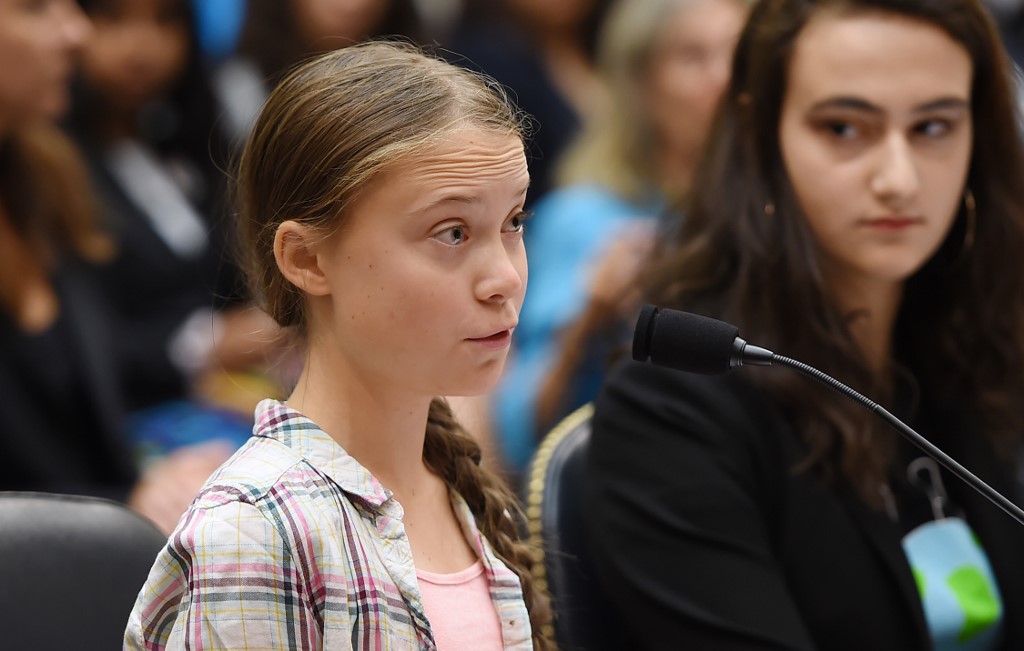 What messages do you want to convey to the people in power and the corporations?

I understand that money is important and so is the GDP but what money is worth once you’re dead. If there’s no more planet to live, there’s no future to spend the money. What about your children? And your future? We’re not talking about politics or economy. This is just about survival. I want you to understand the urgency and the seriousness of the problems we’re facing.  We’re facing your inaction to climate change and your continuous polluting this planet.  You will be basically killing yourself and your children. I’m not saying you should change I’m saying you need to. There’s no other option.

As for corporates, if you don’t care about the climate change; what about the economic benefits that come along with being sustainable in a long term? Renewable energy is much cheaper than fossil fuels. Sustainable agriculture or fishery and other kinds of productions is more profitable in the long run. I understand that there’re obstacles but that doesn’t mean we can’t improve along the way.

What do you want to say to the public?

Regardless of what kinds of impact you make, I think the very first step for each individual to join the climate movement or to live sustainably is to educate yourself. It’s no longer about using less plastic because the problem is far bigger than that. It links to your every day’s life – where the power comes from or the food you eat etc. It’s important to look around and understand that whatever you’re using at this moment comes from nature. We depend on the nature but nature does not depend on humans. The biggest respect you can have for nature is to consume everything wisely and understanding the sources of things you consume and  where it goes.

Second is to consume less and consume sustainably. All products – food, cloth, electricity – have come a long way and have created big carbon footprint and will continue to do so after your consumption. So, reduce first and then consuming sustainably.

Next, everyone can plant tree that’s simple easy and that’s not expensive everyone can do it wherever they’ve a space and it’s good for you not just for the environment: it’s good for your health and decoration in your house. I think those are the main steps that people can immediately start changing their lifestyle.

Greta has been criticized for what she has done. Are you facing the same situation in Thailand, especially because we’re living in a society that seniority is valued?

I face more issues of what if I change when no one else does.  People here don’t believe in their own impacts towards the society or environment. I think it’s because our collective culture, we don’t rise up until someone else does but the truth is  you can be that person and no one will take action if you don’t.

With seniority, I don’t face a lot of those problems. I’ve a circle social that doesn’t care about that. I grew up in an international school with adults and elders listening to my opinion and taking values of it. But I don’t feel like it’s the same with a lot of Thai schools and communities where they see kids as kids who shouldn’t speak up, kids whose ideas and thoughts don’t matter and who are still too young to understand the complexity of the world.

Thais often say children are our future. If that’s the case, why don’t we have a platform for them to speak up and express their ideas. We don’t seem to give importance enough to our youth.

The movement is rather limited to international students or upper-middle class people whereas the poor or middle classes won’t be able to participate in the movement. What would you say to those not participating?

I agree that the climate strike Thailand group right now consists of a lot of foreigners and maybe middle-to-upper-classes Thais but the truth is the whole climate change is about human rights for everyone. Climate change is actually going to impact lower-to-middle income the most. They are vulnerable communities that have low incomes or education – having limited means to protect themselves ,or migrating if that were the case. And this movement is for those people too. The fact that they don’t engage in the movement is simply lack of awareness. It’s not that they don’t care but they don’t know. That’s up to the Thai government, businesses sector and schools to educate their members about this issue. They’re the people who seem to be left out in this conversation, but sadly enough they are the ones who would be most affected.

Brought to you by